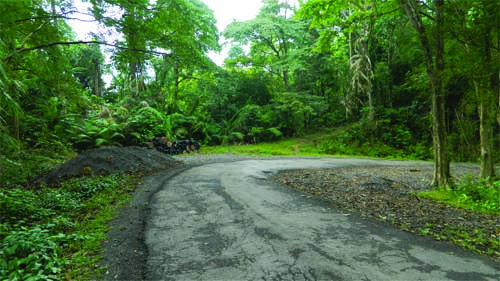 The Jarawa dance video, which created hue and cry in the international and national media and forced the Government of India and Andaman and Nicobar Administration to order a probe, was actually shot by a group of army personnel.
In an independent investigation by LOA, it has come to the fore that police and ground staff of Andaman Aadim Janjathi Vikas Samithi (AAJVS) were not aware as the video was shot after the last convoy left .
Contrary to the statements released to the media by the Administration, the video was shot three years back on , in which two vehicles - a truck and a gypsy belonging to army were involved. In a release, S B Deol, DGP had said that the video was 10 years old and there were no cop in the video. He had also pointed out that a man with camouflaged uniform was visible in the media. However, he did not mention anyrole of defence personnel.
LOA has identified the Jarawa women and girls featuring in the video, which was shot at a place about 8 kms from Jirkatang, known as Chowdhary Gumai. There were six Jarawa women including a pregnant lady, who was shown fully naked. Thadul (16 years) daughter of Thadang, Ecnchobecha (14) d/o Thadang, Cheddatokula (35) wife of Whaydom and Aninja (13) d/o Whaydom featured in the video. Enepowaiele (21) w/o Mahe was 7-8 months pregnant when the video was shot. She gave birth to a baby girl Wane on .
The army personnel traveling in a military truck had waited for the last convoy to pass from and with special permission traveled on the road. It has also come to light that Jarawas mostly belonging to Tirur sector has a Chadda (Jarawa Hut) very close to the place.
Jarawas, still a nomadic community travel from Tirur to Kadamtala and back frequently. They use the temporary chaddas on the way.
The Jarawas in Kadamtala and were able to identify the Jarawa women featuring in the video and the place where it took place.
Enepowaiele, the pregnant woman in the video, who is 24 years now has confirmed to a reliable source about the incident and involvement of army personnel.
However, this does not vindicate the police force present at who allowed the military truck to pass after the last convoy had departed from . The thumb rule is not to allow anybody except AAJVS, Police and personnel dealing with the protection and welfare of Jarawas of specific territorial jurisdiction. This raises a serious question how army personnel, who were on a tour to Baratang could stop inside the Reserve and shoot the video exploiting the vulnerability of a tribe who are at crossroads, unaware of the dangers it poses to their life and culture.
The story about the video published by The Guardian/Observer, was later picked by the national media and highlighted the plight of the Jarawas.
Soon after the expose by news channels, Shakti Sinha, Chief Secretary, ANI Admn had rebutted the episode saying that over the past decade, the population of the Jarawas has increased for the first time since they first came into contact with the outside world 150 years ago.  He also said that a Tribal Reserve has been increased from 847 sq kms to 1028 sq kms.
Speaking to a news channel, Prof Shekhar Singh said that the Lieutenant Governor and the Administration should be put on dock on the issue of contempt of court as the Administration has kept the Andaman Trunk Road open even after the Supreme Court's Order of May 2002.
The issue has also created a ruckus among the politicians and the settler communities who blamed foul play in the timing of the video saying that it was intentionally done to close Andaman Trunk Road, which they claim to be a lifeline.
Posted by Zubair Ahmed at 11:52 AM

Sir,
This is just one incident which has come to the limelight, I am sure there will be many more footage's. The Violations are usually from the Honorable and VIP Guests who have special protections and do not use convoy. The Exemplary punishment are for the normal citizen so that the Admn can show case.

It is very difficult to shoot when one travel in a convoy, hence all including Honorables must adhere to the convoy system, with exceptions in emergent cases.
The Tourist should not be allowed in Tourist Cars/ jeep etc instead they shall be permitted in Buses in the convoy System. The Islanders using own car or a contract carriage may be permitted if they poses the Local ID proof, as of now all Islanders have ID Cards or atleast a Ration Card. The ANIDCO Run Bus services should be incresed so that tourist can use it.
Random Checking of mobile / Video camera footage's should be made, so that there is a sense of fear of Law.
The option for sea route for tourist upto Baratang has to be explored in the long run to decongest vehicles in ATR, this will help to reduce Jarawa contact with Tourist. For the Islanders the Jarawas are a common phenomenon, hence we are no more anxious to have a glimpse and have minimal interaction, because we know our limitations and ATRs importance in every day life.

Whatever has happened is a criminal tresspass; breach of law. This could have been avoided had the convoy system been adhered to. Those behind this misdeed should be punished.

doctornature has said very well.I feel ATR should be closed and water transport has to be encouraged.May be faster boats. But there is no shortcut to closing ATR. Second ,prevent tourism for about a decade and allow the island to recoup itself. Third prevent Havelock from becoming a international massage parlour like Thailand. Four, Neil islands and other such places have be immediately banned from tourism.Five no more resorts and hotels in any part of Andaman.The water scarcity in one of the highest rainfall areas in the country is a sad reflection of the so called development

Government MUST find out the names of all the VIPs who had visited the islands unofficially....

A nice piece of article..Well written and executed.

About The Light of Andamans

The Light of Andamans’ was born out of the zeal and determination to fight against the suffocating Kafkaesque atmosphere on the society that existed even after 30 years of under bureaucratic rule. It was a hangover of the ‘Raj’that extended much too long in the .

The Light of Andamans’ was started in 1975. The paper had always been a crusader, taking up the causes that no other newspaper would touch. In doing so, it very often stepped on the toes of the authorities and had to face persecution in the form of denial of advertisements and numerous court cases against it. For a small stint, the publication came to a halt in 2003.

Gezira Publications Private Limited took over the paper in the year 2005 and transferred the title in a bid to revive the second oldest newsmagazine from extinction and also to carry forward the mission.

The Newsmagazine, under the new management, has undergone a sea change both in form and content. It turned into a full-fledged tabloid with 10 pages with plenty of photographs making both pleasing to the eyes and soothing for the mind. “It has acquired a position where it influences the policies in vital matters concerning the development of the islands, protection of aboriginal tribes and addressing the problems of the disadvantaged groups. The newsmagazine is known and appreciated for its bold, free, fair and balanced reporting.”

Late Govinda Raju and his team worked very hard to rebuild the reputation, goodwill and a healthy new image of the newsmagazine brick by brick. After the demise of Mr Raju in 2010, the magazine is now being edited by Zubair Ahmed and published by Basudev Dass. The newsmagazine continues its mission of highlighting policy issues pertaining to the .